I've been a sporadic House fan, along with about a million other viewers, so it seems a good time to catch up with the enigmatic star of the series, Hugh Laurie. 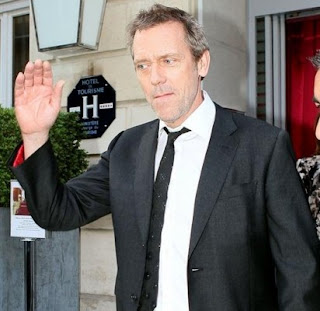 We can see some major characteristics fairly well, the connected Life and Head lines tell us he is not impulsive by nature. By the arch of his Life line, he's also not much of a risk taker, in the sense of bungee jumping or sky diving just to create an adrenaline rush to feel truly alive.

What I love seeing though is Hugh's quite unique Ego line. He formed his primary understanding of himself as a very secluded child, one who naturally felt himself in need of solitude. He had to make himself socially join the rest of us, so to speak, as he learned to express more of himself to others. There was a major choice he had to face somewhere in his early to mid 20s too, from what I can barely see. At this point, a major change occurred, and he found a much more self reliant and expressive understanding come into his persona. This is, essentially, the Hugh that is very public. Make no mistake, Hugh is still very much a loner in his core.

Despite his hermit tendencies, Hugh can reach others emotionally, and knows how to share of himself in that way. So don't characterize him as a cold, unfeeling prick the way his character is. Hugh is no misanthrope. In fact, he has a knack for mentoring and enjoys when he gets a chance to do so in this world.

Now, his thumb shows he favors logic by far when negotiating. He really doesn't know how to be much of a diva, truth be told. And I know he's waving, but those fingers are just about freaking me out... is it just the angle of this shot?

It's definitely the angle of that shot, as Hugh is indeed an Air hand, with tapered fingers, as I kind of expected due to his facial shape as well. Air hands, as you know, are the intellectuals of our society, the ones who are quite content to be lost inside the world of their mind, as they are naturally inclined to avidly "studying" everything around them in their lifetime. They think fast, and they move fast. They get bored and seek mental challenges. In fact, if Air hands are not properly stimulated, tasks which don't engage the mind can become nearly torturous. 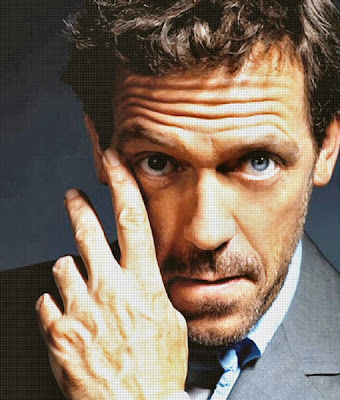 One thing he certainly does share with his character is his philosophical side, check out those circular patterns in the knuckles. That indicates thoughts that go round and round before they are released to the next phase when manifesting something. A fancy way of saying, he has to stop and look at something from every angle before he's ready to take it to its next logical step, and his fingertips tell us he's extremely detail oriented as well.
Written by Alissa Hall at 8:00 AM