Cameron Diaz is a hugely successful actor, without a doubt, and I got curious to see if we could take a look at her palm. Let's start with the fact she's a Water hand. Water handed people are the natural empaths, they live in the emotional world, and are the opposite of a "cerebral" personality, or, one who thinks but does not feel. Water hands feel, and how they feel (as well as the emotions of those nearest to their hearts) will create the thoughts, not vice versa. Gifted in both her logic and her willpower, Cameron knows how to stand up for herself, as well as how to use diplomacy, when negotiating. 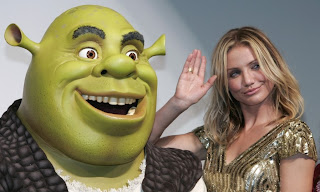 Cameron is definitely not a risk taker though, as we see in the shallow arch of her Life line. She far more prefers the sedentary life over zip-lining, but hey... as an actor, she's already had her share of adventure just doing her job. She is a bit impulsive though, as we can see in the gap between her Life and Head lines. So there's a disconnect with how Cameron thinks she will behave, and the actions she takes in the moment (based off her emotions, being a Water hand).

Cameron absolutely connects easily and naturally to those she is with, and being a Water hand, this is not at all uncommon. They are the kind of person who you want for a best friend, because they always seem to just know how you're feeling, or the right way to help you through a difficult patch. 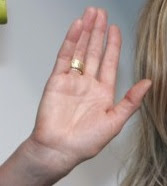 For certain, she thinks long and dreamier thought patterns, with her generous Head line. However, the Head line does not seem to dip into the mount of Luna, so less access to the subconscious than other long Head lines we've seen on the blog.

Her Ego line is also clear and straightforward, which shows her self determination that came through early in her personality's development. She's very self possessed, and always has been, so this helped her take the path that she has, becoming the person she wants to be. However, Cameron won't be "done" discovering herself until well past her 60s, she may not want to go cliff diving, but she won't be lazy when it comes to developing her understanding of herself.
Written by Alissa Hall at 1:23 PM