Channing Tatum is everywhere this year with the summer release of "Magic Mike," so with this much exposure, how could we not read his palm? Let's take a peek.... Channing is a combination Earth-Air palm, and extremely interesting and relatively rarer mix.


His Earth handed side gives him a groundedness that exudes as calm, and ultimately, as confidence. However, the "slow to react" aspect of the typical Earth hand is countered by the Air hand side of him, which is quick to respond, and often very dexterious. They literally move fast, think fast. Channing's gift is that he has fast reflexes, and yet is not hasty in his approach to life. A fascinating counterbalance! 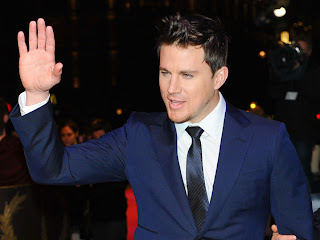 The connected Life and Head line tells us that he is not impulsive by nature, but he is one hell of a risk taker. This is a very adventurous sweep to the Life line on his palm, notice how it doesn't curve toward the thumb but instead arches wide? This is similar to George Clooney's palm, non-impulsive and yet wildly adventurous. So, can we expect a lifetime of bachelorhood also?

Channing's Heart line touches the fingers, so we know he connects naturally and easily with others on an emotional level. His relationships are met with an open heart, and by one who is not fearful of his emotional side. It looks like there's a branch that reaches towards the mount of Jupiter, which would indicate Channing use his natural compassion to teach others, and so he may end up in mentoring situations in the next 5+ years as he grows into this aspect of himself.

The length of his Head line indicates long thought patterns, one who is prone to daydreaming in order to problem solve. He is able to "follow his mind downstream," if you will. And the Ego (or Fate) line marches up the center of the palm, showing us that he had a clear idea of himself at a very early age in this incarnation. His single-mindedness about achieving his goals is seen here.

Lastly, he has a good gut instinct when listening to his intuitive side. Add to that the fact he also is connected to his intuition on the mental level, which means he experiences flashes of clairsentience (or "just knowing"), as well as dreams that feel more like spiritual visitations, and you have a naturally intuitive personality.

Given such a generous pile of personal attributes, Channing will be able to stay the course in his career, and will be the least likely to be sidetracked by alcohol, drug or other dependency issues so often seen in actors. He has a chip on his shoulder though, wanting to prove himself to us, and although he's willing to use his good looks and physicality to gain recognition, he's going to be like Brad Pitt in that he will want to prove he's not just another pretty face in Hollywood. Edgy roles will be next for Channing, much like Brad went from Thelma & Louise to Fight Club.
Written by Alissa Hall at 10:10 AM